The architect Antonio Barluzzi (1884-1960) was born in Rome. He devoted his life to the Holy Land and designed, on behalf of the Custody of the Holy Land, new Sanctuaries. the first one was at the foot of the Mount of olives called ‘Gethsemane’  meaning the Olive Oil Press. After that he created the  ‘the Church of the Transfiguration’ on Mount Tabor, which was to be followed by many others works.

Barluzzi brought new architecture to the Holy Land. At that time, designers were following the styles of past eras by rebuilding of gothic cross-shaped churches in a  classic Byzantine style

Antonio Barluzzi was a strong believer. He conceived these religious sanctuaries to remind “the Mystery of Jesus’ life”, so that every pious visitor would be able to feel the serenity of this sacred place.

After receiving the task of designing the new “Church of All Nations” in the Gethsemane project, which also included the design of the Sanctuary of Mount Tabor, Barluzzi adapted the project according to the discoveries that took place at the same time on the ruins of the Byzantine church of the fourth century.

The basilica buit in 1924 was designed as a unique space. It contains only two rows of six columns, into which the light is filtered throughmidnight blue glazing, where thousands of stars are reminding Jesus’ Night of agony.

The mosaics that decorate the apses are the illustrations of events that occurred on the next morning of the agony, the kiss of Judas and his arrest.

Everything has been designed to make this place for meditation and prayer and to lead to the most important element : the Stone, remembering the location where Jesus spent the night crying and praying,  located near the ‘altar.

Antonio Barluzzi was getting quite frustrated at not being known enough and left his mark by been represented on the vault of the dome to the right of the apse.

Also in ‘the Church of the Visitation’  at ‘Ein Karem one can see the architecte been painted in one of the drawings inside the church.

In 1960 began the construction of an even more remarkable church : the ‘Annunciation to Mary’ in Nazareth.

Barluzzi died that year and did  not have the opportunity to see this church built according to his plans.

The Basilica of the agony – Gethsemane

The church of the Mount of Beatitudes

The Church of the Transfiguration – Mont Tabor

View of Mont Tabor and the Church of the Transfiguration

The ”lauras” in the Judean desert January 2015

The lauras (laurae in Latin) are a type of monastery,
consisting of a cluster of cells or caves.
They gave their name to the whole monastic ideology,
whose fascinating remains are the main evidence of early Christian monasteries.

IIn the Orthodox Church and the Eastern Churches, a  laura is a religious institution where the monks  (from the latin word monachus: ‘single,solitary’), lived five days a week as hermits, scattered in remote populated areas. Saturday nights,  sundays and holidays were community days, on which the monks gathered under the leadership of an Abbot to sing,  take their meals together and receive instructions. They then joined their hermitage for the week charged with a food basket (cooked food, wine, etc …) This is a semi-hermit mixed monastic lifestyle.

Sabbas the Sanctified was born in 439 AD in Cappadocia he directed the great Laura Mar Saba for almost 50 years. During all these years he expanded the site to accommodate the hundreds of monks who lived in the area and built walls to protect the community.

Saint Sabbas lived about 10 years in a cave near the future site of the monastery. He found in this remote location, near a river bed the Kidron, the perfect place to gather and fully live his solitude. 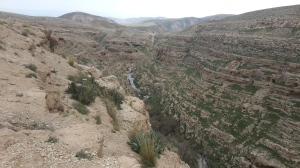 The Kidron in the Judean desert in February 2015

In the time of Saint Sabbas a total of thirteen monasteries were established in the Judean desert, some of them have become famous in particular the Monasteries of Saint Martyrius and Saint Euthemius. The number of hermits went from hundreds to thousands during this period.

He influenced and reshaped the customs and lifestyle of the monks. He was the first among ‘the fathers of the desert hermit’ who formulated a set of written rules on the conduct and way of life of the monks in the Judean desert. 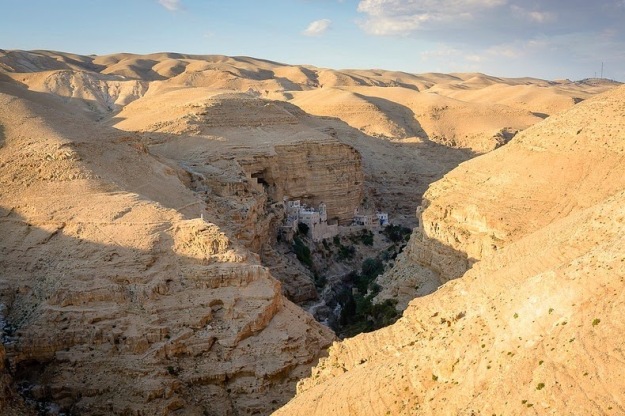