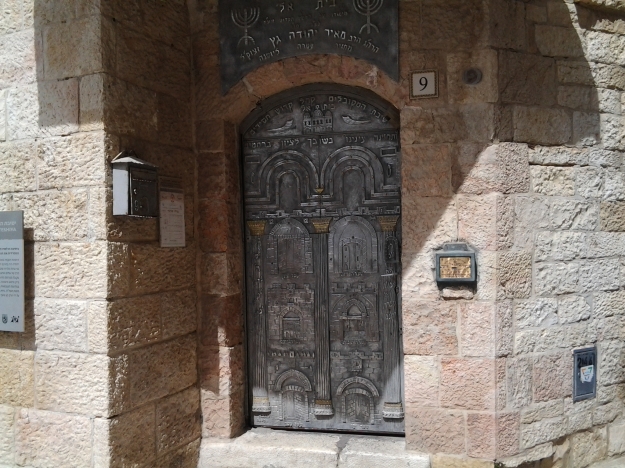 Beautiful gate of the ‘Ieshiva Bet El’ in the Jewish quarter

Nine gates are in the wall of the Old city of Jerusalem built in the 16th century by Suleiman the Magnificent, they protect the cradle of the three monotheistic religions, Judaism, Christianity and Islam :

-The Golden Gate – the Sultan Suleiman the Magnificent while renovating the walls of the old city definitely closed that gate in order to refrain the Jewish Messiah to pass.
– The Dung gate – Poor people used to live in the lower part of the old city  where  they  probably threw garbage. Next to it and later on in the 1980’s excavation an old medieval gate was opened to allow an easier passage
– The Tanners gate reopened recently.
– The Sion Gate or David Gate where is the Tomb of King David
– The Jaffa Gate in the direction of the Biblical city of Joppée, called Jaffa today.
– The New gate built at the end of the nineteen century to allow a quick passage to the    Christian quarter .
– The Damascus Gate the most beautiful gate in the north in direction of Naplouse and Damas.
– The Flowers Gate also called the Herod’s Gate opened in 1875 after the construction started outside the walls.
– The Lions Gate according to a legend the sultan Soliman the Magnificent had a terrible nightmare,  lions threatening to devour him as he did not seriously provide the protection of his population living inside the old city. He immediately hastened the construction of the city walls.