Mosaics of the Church of loaves and fishes 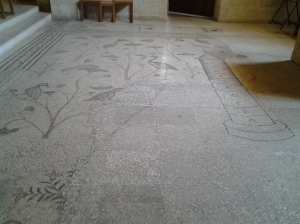 Mosaic with the nilometer

The Benedictine Church of the Multiplication of Loaves and Fishes, called Tabgha in Arabic or Heptategon in Latin meaning –  seven sources is located on the shores of  the Sea of Galilee on the ancient roman road – The Via Maris.

The magnificent Byzantine mosaics of the church, dating from the sixth century,  describe  the migratory birds crossing the Holy land and resting at the Sea of Galilee.

Israel is the passage of migratory birds on their way to Africa heading to Europe, one never get tired of watching flights of storks, cranes, pelicans, cormorants, kingfishers, hawks and many others above our heads in Spring or Autumn.

There is also a Nilometer in  this mosaic, a measure that was used in Egypt to know the height of the Nile.

The fact that a nilometer is shown in this mosaic implies either : 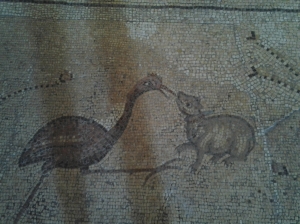 An Rock Hyrax fed by a bird