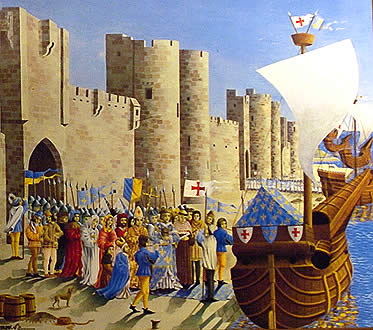 Every year at the end of August, the city of Aigues-Mortes in southern France celebrates the departure of Saint Louis for the Crusades.

This good-hearted and generous king never hesitated to invite the poors to his table. He vowed to cross himself after a long illness that many thought fatal.

While a relative peace and economic prosperity reigned in the Middle East, and diplomatic and trade relations were constantly increasing, an unwelcome alliance was made with the Prince of Damascus against the Sultan of Egypt. In 1244 the sultan took Jerusalem and destroyed the Christian army.

Pope Innocent IV then called for a new crusade and Saint Louis hasted to organise it.

The seventh crusade was to be the first one of the two crusades undertaken under the direction of Saint Louis – King of France.

In this southern city of France, construction work would be carried out, such as a port, a church called the ”Sablon”, and a tower to protect the port called ”Constance”, of which remains exist in the old town of Aigues-Mortes to this day.

This expedition regrouped 36,000 men committed to a new conquest of the holy places and the Holy Sepulchre, but also in order to found a colony in Africa. Therefore it was necessary to bring not only arms, ammunition and food, but tools as well.

A crusade in which no foreign sovereign was involved … strictly French !!

After receiving the papal blessing in Lyon, Saint Louis reached Aigues-Mortes the 25th of August 1248.

The cry of ” God willing”  accompanied the departure of these Fancs to the Holy Land.

Saint Louis remained in the Holy Land for four years in order to build the Kingdom of Jerusalem and to allow it to be capable of defending itself against a new threat: the Mameluks. The crusade ended in 1254 by the sudden return of the king to France after the death of Blanche of Castile, his mother who ensured the regency during his absence. Although this crusade did not reach the desired results, it was important for the survival of the Kingdom in the Holy Land.

Following the conquest by the Mamluks of the port City of Jaffa, Caesarea and Arsuf, Saint Louis decided to return for a new crusade.

While reaching the port of Tunis a plague broke out, and a large part of his troops became ill, as well as the king himself, who died in August 25th, 1270 however it seems that the scorbut desease sould be the reason of his death. 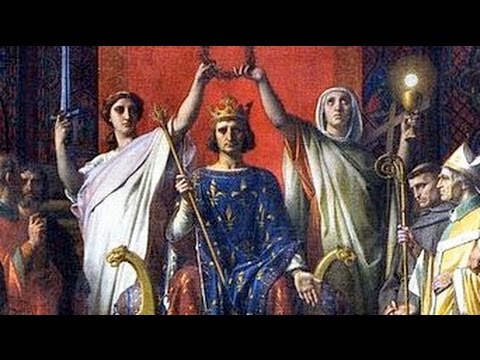